Having restored a number of classic bikes back to original I was really drawn to the concept of altering the Original frame. I was playing with the idea of using a Yamaha radian swing arm.
Mule had done a completely new frame, but despite its beautifull lightweight look, there still was something missing.
It was upon seeing this bike when I realized that this was the rear wheel setup I was looking for.
I was really disappointed by the build quality from these Yamaha’s.
The frame welds were ugly and lots of parts lacked quality in the sense of being durable.
The alloy tank and seat I had already bought from red max speed shop in England, so the time of fitting, and measuring began.
I decided to source a shock for the rear which became an example from a Honda Hornet. (like the front fork)
While measuring I found that the seat frame had to be raised 50mm.
So the original frame was cut and altered in a way no other builder has yet attempted.
I need to be original. 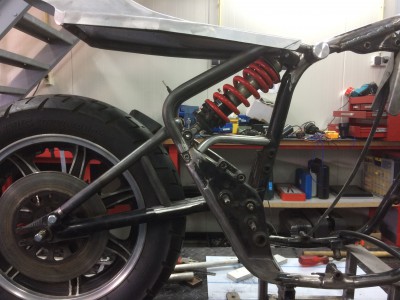