Remember Me? …….The sound of this song played loud in my workshop when I unloaded my just purchased Honda Dominator at the workshop.
Looking at the Bike with this music I thought …..yeah what a great name for a Bike!
So Right at that very moment it was decided that the dommie would be blue.

It al started when I was working on my workshop when I visited a friend of mine in Nieuwleusen.
He also has another friend who builds bikes, his name is Klompjan and he really makes fine products. 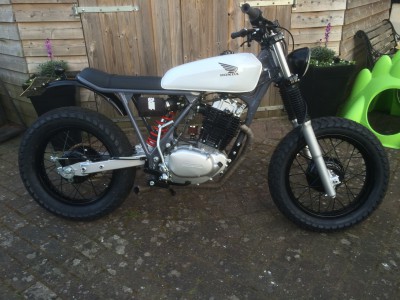 He had a Honda 650 scrambler for sale but it was based on a XR650. So kickstart only.
I really wanted an electric start so the search for an Nx650 began and 1/2 a year later I found one nearby for the right price.

It turned out to be a rather rare example because it has a kickstart as wel and it has drum brake at the rear. I haven’t seen many with both these features.